Recent Posts
Delivering our baby unassisted. We did it!
What is the the Indoor Generation? (and How...
What is The Library of Things?
Best Places to Immerse Yourself in Local Culture
How to Declutter Your Life Effectively
The Power of Kindness
Why Should We Listen to Our Gut?
The Slow Food Movement and Why it’s More...
Why Hugs are So Important for Your Health
13 Questions With… Reverend Deb Connor
Home » 13 Questions with… ManyMinds Founder Kirsty Hulse
InspirationInterviews

If there is one thing that Kirsty Hulse has in common with Winston Churchill, Frida Kahlo and Isaac Newton, it is that she does her best work in bed. Kirsty Hulse is the founder and Managing Director of ManyMinds; a digital marketing agency that works exclusively with freelancers in remote teams across the world. With clients ranging from global blue chips to small start ups, Kirsty has truly disrupted the way that companies outsource their marketing efforts.

With over a decade’s experience defining digital marketing strategies for some of the worlds biggest brands, Kirsty is a recognised digital expert and has spoken at conferences across the world on digital, innovation and leadership. In 2018 she also published her first book, The Future is Freelance, a must read for anyone starting out in their freelance career.

1) What is your name and where do you live?

2) What is your favourite soulventure?

On New Year’s Eve this year, my husband and I rented a van to spend a couple of weeks driving through his home state, California. We had a plan and an itinerary, though wildfires spreading through the area at the time threw a lot of this out of the window. On a whim, we decided to take a detour and drive to the Mojave desert. We didn’t plan, we knew you can camp freely so thought we’d just turn up somewhere and park. We arrived at night and with perfect comedy timing, immediately got the van stuck in sand. It was dark, so we decided to worry about it the next day when we had sunlight. In the morning, we could see that we were in a real mess. The entire place was, literally, deserted. We didn’t have reception and were at least a 4 hour walk from civilization in desert heat. The wheel was just spinning and the van was going nowhere. We tried putting sticks under the tyres, me jumping on the back and when nothing worked just stood in silent despondency for a few minutes. After about six hours of trying to dig ourselves out with a small frying pan, I resolved myself to a long, hot, desperate walk for help when I saw my husband running towards a Jeep that was driving along the dirt track. It was the first time we’d seen another car since we arrived. With the help from a stranger, we got out, though it cost the stranger his rope. We were so grateful, we asked if we could give him anything in return. He simply shook our hands and said “just pass it on”.

3) What’s something that no-one would guess about you?

I’m an introvert! I speak a lot at conferences so most presume I’m very extroverted, but I’m naturally very shy; I’ve just trained myself and I find it bloody exhausting!

4) What single thing would improve the quality of your life?

Less WhatsApp groups! Honestly, I am in so many very active WhatApps groups that I simply cannot keep up with and it basically renders me a constant disappointment to my friends. Ha.

5) If you could be doing anything, anywhere, right now, what would it be?

Exactly what I am doing. I try to not live in day dreams too much, if I want to do something, I’ll do it! 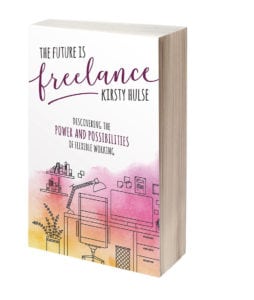 6) Of what are you most proud?

Writing my book, I think. Being a writer was something I’d always loosely dreamed of, though it felt like such a huge feat, I never entirely trusted myself to start, and finish, the writing of an entire book. I am proud that I did and even prouder that now those floodgates are open, I feel I can keep writing and do the only thing I’ve probably ever consistently enjoyed throughout my life.

7) Who do you most admire and why?

The first person that popped into my head was my husband and I internally rolled my eyes at myself. But, I think he is. He’s American and we met in a bar, got married three months later and went on this absolutely bonkers journey of living in two different continents. Eventually, we settled in the UK, and having to completely re-establish yourself in your 30s is incredibly difficult. He embarked on a totally new career and started right at the bottom rung of the ladder. After having been running companies previously, he didn’t let his ego prevent him from following his dreams, I really really admire that.

Oh well what can I say to this now after the above?!

I want to ride a motorbike and I keep starting and then chickening out. It’s just so much fun and imbues you with a real sense of freedom, but also terrifying. I’ll get there eventually.

11) If you could say one thing to lots of people, what would it be?

You’re doing a good job. We don’t tell ourselves that enough.

Feeling like I am working hard to help other people. That sensation of being exhausted, but knowing you’re doing good work and making a difference, is everything.

13) What is your guiltiest pleasure?

I can’t say I am guilty about it, but I can’t keep a handle on myself around hummus. I’ll eat tubs of it without blinking; I’ll happily eat if off my finger.